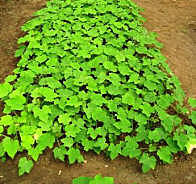 In southern Africa, larger areas are under semiarid and arid conditions with a moderate-to-high risk of drought. The drought resistant plant, Jatropha curcas L., Euphorbiaceae that can grow on lands not suited for agriculture and both improve the environment and supply raw material for local communities is attractive for resource-poor farmers. Although Jatropha is commonly planted in southern Africa, research on cultivation and propagation of Jatropha is limited. This study provides documentation of the germination of Jatropha seeds planted in nursery in containers composed of Kalahari Sand. Sampling period was undertaken from late raining season to the beginning of dry period (February to June 2003). The study shows high viability of the seeds with a mean germination rate above 93 percent and a completed germination within 9 days. Manure during germination phase appears to have a negative impact on the germination. However, the results indicate that manure has a positive impact on the growth rate after germination has been initiated. Likewise, the intensity of watering and temperature seems to have a fundamental impact on the germination rate. Pre-treatment of the seeds did not effect the germination positively.

Since the oil crisis of the 1970s and recognition of the limitations of world oil resources, vegetable oils have received special attention (Grimm 1996; Heller 1996; Henning 2000a; Pratt et al. 2002). Special interest has been shown in the cultivation of the tropical physic nut (Jatropha curcas L., Euphorbiaceae) for oil extraction, especially since it is drought resistant and can be cultivated on marginal land, without competing with food production (Heller 1996; Grimm 1996; RF 1998).

Jatropha was introduced into Zimbabwe in the 1940s. Jatropha curcas L. is a multipurpose large shrub or small tree of Latin American origin. It is local adjusted throughout arid and semiarid tropical regions of the world with an average annual rainfall of between 300 and 1000 mm (Palgrave 1983; Heller 1996; CATIE 2000; Henning 2002). In Zimbabwe, it is now found in many parts of the country, with known concentrations in the north-eastern districts of Mutoko, Wedza, Chiweshe, Mudzi and Nyanga north. Jatropha grows on well-drained soils with good aeration and is well adapted to marginal soils with low nutrient content. It occurs mainly at lower altitudes (0-500 m) in areas with average annual temperatures well above 20◦ C but can grow at higher altitudes and tolerates slight frost. It is not sensitive to day length (ICRAF 2003). Locally, it is grown as a boundary fence or live hedge and can be used to reclaim eroded areas (Heller 1996; Jøker & Jepsen 2003).

Hypothesis 1: Manure has a positive impact on germination of Jatropha. Seeds from Jatropha curcas L. germinate and grow faster in soil with manure.

Hypothesis 2: The intensity of watering has a significant impact on the germination and growth of Jatropha curcas L.

Hypothesis 3: Temperature has a significant impact on the germination and growth of Jatropha curcas L.

The study was undertaken in Mkhosana, Victoria Falls situated in northern-western Zimbabwe. The area is on Kalahari Sand (deep, well-drained, nutrient-poor sands). The area receives a low and erratic mean rainfall of about 650 mm, falling from November to April. Mean summer and winter temperatures are 30 o C and 10 o C respectively. Ground frost is sometimes experienced between May and August. The altitude is 980 metres above sea level.

The field methodology involved two stages: (i) a general assessment of the viability of the seeds and the germination rate for generative propagation of Jatropha curcas L.; (ii) a more detailed assessment of the germination and growth rate of Jatropha curcas L. during the first eight weeks from seed planting. Both assessments were undertaken in nursery with approximately 50 percent density shade. Seeds used in both assessments were locally collected in June 2002. Seeds were stored in Hessian bags and kept under uncontrolled room conditions until required for planting. The seed provenance is unknown. The average temperature for each month is based on own data. Cow manure has been used for trials in the detailed assessment.

Pre-cultivation of Jatropha curcas L. seeds in containers (milk packets, tin and poly-ethylene bags) composed of Kalahari Sand. The seeds were sown in the soil at a depth of 3 cm in each container (method after Henning 2000b). The assessment was undertaken in the period February to April 2003. Watering in February was made four times per week and two times per week in March and April. Numbers of days to first and last germination for each trial were observed. Moreover, measurements of the percentage of germinated seeds were made.

Assessment of the mean days of germination for seeds planted in May and June 2003 were made afterwards. The total number of germinated seeds during this period was not measured. Watering was made 2 times per week.

Six experimental trials were made. Each trial consisted of ten seeds planted with one seed in each plant container. The seeds were planted in a dept of 3 cm. In two trials (C and D), pre-treatment of the seeds were carried out in order to enhance rapid and uniform germination by removing the testa by cracking each seed in the hand, carefully.

The assessment was undertaken in eight weeks during the period May to June 2003. The heights of the plant were measured once per week. The trials had the following design:

Trials A, B, C, and D describe the impact of using manure and pre-treatment of seeds. Trials A to D were watered three times per week.

Design of trials E and F were similar to trials A, B. Trials E and F describes the impact of lower watering intensity on the germination rate in soil with and without manure. Trials E, F were watered once a week.

In the period from February to April, out of 4771 planted seeds a total number of 4616 seeds germinated (96.8 percent survival). The mean germination rate for each month varied from 93.2 percent to 97.6 percent. The highest germination rate among the trials was achieved in April (table 1).

Table 1 Analysis of mean days of germination and mean germination rate across month and water intervals. 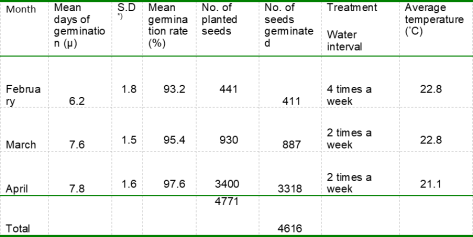 The mean days of germination for seeds planted in May and June were 7.9 days and 11.8 days, respectively. The mean day of germination for the seeds during all five months was 8.3 days. The average monthly temperature during the whole sampling period varied 7.8 ◦C from 22.8 ◦C in February and March to 15 ◦C in June. Most significant difference in temperature was observed from April to May (3.3 ◦C) (fig. 1). The most significant difference in mean day of germination was seen from May to June (3.9 days).

Between week three and four, the highest increase in growth was obtained by seeds in trial A, D and F. During one week the seeds grew from 1.8 cm to 7-9.5 cm. The growth rate for seeds in trial B and C were decreasing during this week.

In our general assessment, Short-term storage under uncontrolled room conditions did not appear to affect the germination of Jatropha curcas L. as this showed high viability (> 93 percent).

The seed material used in both assessments was collected from the same area in June 2002. The Jatropha seeds are oily and do not store for long. Research on viability of Jatropha seeds shows a decrease due to term of storage. Seeds older than 15 months show viability below 50 % (Kobilke 1989). In our general assessment the viability for seeds planted in May and June was not measured. It can therefore not be excluded that more than ten months storage under uncontrolled room condition could have had a negative affect on the germination of the seeds.

Assessments made in February to April are comparable with trials made in May and June. The watering intensity was two times per week and the seeds were planted in Kalahari Sand only. However, the germination period was longer in May and June, especially. It seems that the temperature and the fact that the general assessment was made during the end of the raining season have had an impact on the mean days of germination of the seeds. The watering intensity and humidity have been higher during the raining season than in the dry period (May and June).

In the literature the germination is said to take 10 days under good moisture conditions (Heller 1996; Henning 2000a; ICRAF 2003). In our research we have achieved germination after four days depending on which month the seeds were planted. The best time for planting Jatropha curcas L. on Kalahari Sand, in the period late raining season to start of dry season, will be during the raining season. Experience in Zimbabwe has shown that high rainfall in relatively cooler parts of the country does not encourage the same vigorous growth. However, in the low-weld areas, Jatropha grows well. Jatropha does not thrive in wetland conditions (RF 1998).

Our observation of the growth rate indicate that Jatropha curcas L. is a fast starter and do not need manure to germinate. When germination is initiated the shooting of the seedling is fast and will within two weeks grow app. 10 cm.  The impact of adding manure to the soil is not significant. From our observation during the eight week assessment of the growth rate adding of manure seems to have a positive impact on the growth rate. From our data the two trials with the highest growth after eight weeks (app. 14 cm) has both been planted in a mixed soil with manure. Highest growth rate for all trials was achieve in trial F with manure and watered once a week.

From our research adding of manure after germination in order to increase the growth rate seems to be a possibility.

Freshly harvested seeds show dormancy and after-ripening is necessary before the seeds can germinate (Jøker and Jepsen 2003).  Kobilke (1989) tried to break induced dormancy. Removal of the testa proved more successful than presoaking alone. However, Pre-treatment of the orthodox seeds did in our research not seem to make an improved impact on the germination and growth rate. The trials with pre-treated seeds appear to have the lowest growth rate.

This study has provided data on the germination of the specie Jatropha curcas L. planted on Kalahari Sand. The study shows high viability of the seeds with a mean germination rate above 93 % and a completed germination within 9 days.

Pre-treatment of the seeds before planting did not effect the germination positively.

Henning, R. (2000a). The Jatropha Booklet. A Guide to the Jatropha System and its Dissemination in Zambia. GTZ-ASIP Support Project Southern Province. Bagani GbR.

Henning, R. (2000b). The Jatropha Manual.A guide to the Integrated Exploitation of the Jatropha Plant in Zambia.

Henning, R. (2000c). Use of Jatropha curcas oil as raw material and fuel: an integrated approach to create income and supply energy for rural development. Experiences of the Jatropha Project in Mali, West Africa. Presentation at the International Meeting “Renewable Energy – A Vehicle for Local Development – II”. Folkecenter for Renewable Energy, Denmark, August 2000.

Henning, R. (2002). Using the Indigenous Knowledge of Jatropha – The use of Jatropha curcas oil as raw material and fuel. IK Notes. No.47. August. World Bank

Makkar, H.P.S, Becker, K and B. Schmook (2001). Edible provenances of Jatropha curcas from Quintna Roo state of Mexico and effect of roasting on antinutrient and toxic factors in seeds. Institute for Animal Production in the Tropics and Subtropics (480), University of Hohenheim, D-70593 Stuttgart, Germany.