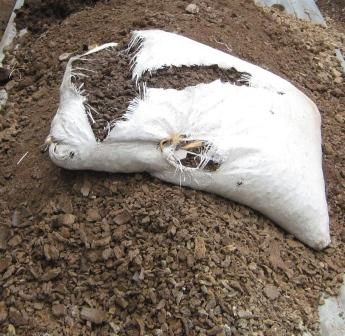 The effect of Jatropha on poor soils.

Initially poor soils will result in poor harvests. You get nothing for nothing. However, in due time a couple of systems are going to work. Jatropha will gradually develop into a large shrub, providing shade and/or shelter to other crops (depending on planting distance). Furthermore the roots of Jatropha grow pretty deep and will touch layers where the normal annual crops or weeds do not reach. The nutrients picked up from these layers are reaching the surface via the Jatropha plants. Through pruning and shedding of the leaves, the nutrients will return to the surface, enriching the upper layer where other crops are intended to grow.

As the seeds from Jatropha are pressed, the remaining seed cake should be returned to the surface, because it is rich in N, P and K, equal or even richer than chicken manure.

I analyzed a lot of seedcake all over the world and it probably not surprises you that the nutrient content in de seedcake depends greatly on the soil where the seeds come form.
However, as an average, you can use the following ratio. N 4, P 1, K 1.5 . This means that in 1 kg seedcake you find 4 % N (= 40 grams) etc. etc.
Compared with other organic fertilizers (chicken, cow, palm bunch) this is a good value, so that is your first benchmark.
However, seedcake contains a lot more organic matter than the other organic fertilizers and therefore the results (especially on poor tropical soils) will be much better. So that is your second benchmark.
Compared with a chemical fertilizer like NPK 20-20-20, the seedcake has 5 times les nitrogen. (the most important lacking nutrient in most cases) So if a MT of chemical fertilizers costs about $ 500, (Tanzania) the nutritional value of seedcake in that same marked is $ 100. However, the chicken manure in Tanzania only fetches $ 20 per Mt, and seedcake should sell slightly better in the market, I would say $ 30-50. So that is your third benchmark.

Having said this, the true value of the seedcake depends on local conditions, because you have to sell (or to upgrade in biogas or briquettes)) the seedcake as close as possible to the pressing facility. It is bulky, and if not stored properly, it becomes messy as well. It only would take a good marketing strategy and simple techniques to turn seedcake into a beautiful organic fertilizer. For example you can turn the seedcake into a palletized organic fertilizer and upgrading the nutritional value with a cheap chemical N like urea. However, until than the best use still is returning it from the land where it comes from. 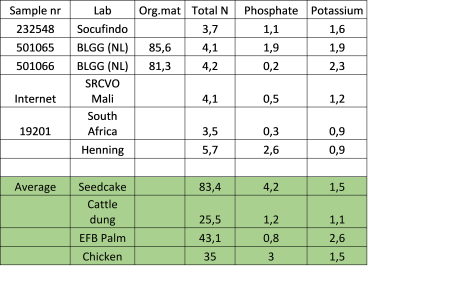 By using 2 tons per ha Jatropha seedcake at a value of Euro 200 a yield increase of 2.8 tons of maize was realized with a value of Euro 560
Once when his Jatropha plants will yield (1000 plants/ha), the farmer will be able to collect at least 1000 kg of seeds at a sales price of 0.15 which makes another 150 Euro.

This is a comparison based on market prices. Costs of labour and handling for both crops are not included.